The Vice-Chancellor of Alex Ekwueme Federal University Ndufu-Alike, Ebonyi State, Prof. Sunday Elom has charged the newly-admitted students to take their studies seriously if they want to have a successful academic pursuit in the University.

The Vice-Chancellor made this known recently during a 2-day orientation programme organized by the Students’ Affairs Department for freshmen for the 2020/2021 academic session.

Represented by the Deputy Vice-chancellor, Academic, Prof. Dennis Akor, the Vice-Chancellor warned the students to desist from cultism, examination malpractice, and other unwholesome activities, as the University has zero-tolerance for such vices. 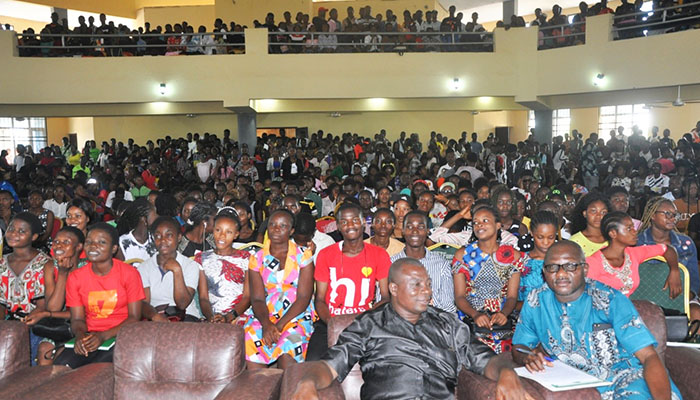 The Vice-Chancellor also informed the freshmen that the University is one of the few institutions that runs a stable academic calendar in the country, and advised them to be up and doing in their academic activities.

He further stressed that the University is hinged on the core values of Excellence and integrity, adding that the production of graduates with excellent academic records and sterling character is the forte of the University. He therefore encouraged them to be serious and attentive to their academic work.

While welcoming the students who converged at the Prof. Abubakar Adamu Rasheed auditorium for the exercise, the Acting Dean, Students’ Affairs, Dr. N.A Obasi said the freshmen should consider themselves lucky for being admitted into the University considering the high number of candidates that applied for admission spaces in the University.

He also noted that the orientation programme was approved by the Vice-Chancellor to provide opportunity for the freshmen to be acquainted with the vision and mission of the University as well as her academic rules and regulations. This he said was meant to prepare the students for a successful academic journey in the institution.

The University Registrar Mrs. Odisa C. Okeke, who was represented by the Deputy Registrar, Senate Affairs, Mr. Friday Onwumere stated that the importance of the orientation programme was to help students know how to relate with both staff and their class mates, and encouraged them to remain focused so that they can graduate on time as the University has a stable academic calendar.

He further urged the freshmen to dress decently in order to avoid any kind of molestation or sexual harassment, and also encouraged them to ensure they complete all registration processes, including course registration in order not to lose their admission or have problem in their academic activities in the future.

The Deputy Bursar, Mr. Gabriel udume, who represented the University Bursar, Mr. Kingsley Oyekezie at the event, told the freshmen to make their payments through the appropriate channels in order to avoid being duped, urging them to ensure they pay the accurate amount as over or under payments would not be accepted. He stressed that there will be no refund of money after payment, and admonished them to always heed the directives on payments before paying.

Resources persons were also on hand to speak to the new students on diverse topics, all geared towards preparing them for a successful academic pursuit in the University. Some of them include; Director, Academic Planning, Prof. Abel Ezeoha who spoke on Academic Issues: Probation/Withdrawal/Rustication/Expulsion; University Librarian, Dr. Juliana Akidi spoke on the Use of Library; Dean, Faculty of Social Sciences, Prof. Smart Otu spoke on Security Consciousness in Challenging Times; Chief Security Officer, Major Mgbebu Onwe (Rtd.) interacted with the students on Security Matters; Mr. while Mr. Cornelius Offia took the students through the Culture of Ikwo people and the host community’s environment, while Mr. Jude Okeke lectured them on SERVICOM and Service Delivery.

Other speakers were; Mrs. Felicia Ewa and Mr. Paul Igwe who spoke on Good Moral Conduct in the University and Proper Hostel Management; Dr. Ngozi Nwudu, on the Need for Counselling in the University; and Dr. Nneka Onwumere, spoke on Suicide Among the Youths: Causes and Preventions/Sexual Harassment.

The highlight of the 2-day event was an exhortation and prayer session by Pastor Israel Ekokoiu, where he admonished the students to put God first in their lives in order to succeed in their academic activities. The man of God also prayed for the University and her Management, and staff and students.